Hi everyone, it’s that time of year where your law school gets ranked and you can send harassing messages to your friends if their law school fell in the rankings. US News has published it’s annual “Best Graduate Schools” rankings. As I’ve said before, the US News rankings are essentially evil, encouraging big spending by law schools that has led to wildly inflated tuition. Despite that, they are also essentially accurate, giving a measure of a law school’s prestige that aligns fairly well with perception in the wider legal world.

Okay, it’s commentary time. First off I want to point how spot on I was that American was headed for big trouble. They went from the 40’s two years ago to the 50’s last year, and now took a whopping negative sixteen dive to the 72 spot this year. While drops like that are common outside the top 100, it’s not often you see them up top: only Washington and Lee did worse in the top 100.

Washington and Lee’s slide is very bizarre, as unlike American they are doing a fine job attracting quality students. If we were to rank W&L by median LSAT alone, they would still be a top 25 school. While some less well-endowed private schools are having trouble attracting students, who are fleeing for in-state tuition at public schools, W&L doesn’t seem to have that problem, so who knows what’s up. I’ll try to find out. I’m guessing that whatever the problem is it will be corrected soon and W&L will stay strongish long term.

Choosing The Best School Law for You 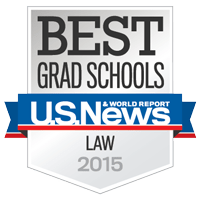 Start with the source of these rankings: US News and World Report’s Best Graduate Schools. This well-known guide ranks schools to help you pick reaches, targets, and safeties. Along with the rankings, you’ll find plenty of valuable articles and advice, along with tons of information about specific schools.

Also check out this reputable rankings guide from Princeton Review:

Click Here To Add Rankings To An Amazon Cart

UPDATE 3.12.14: So it appears the Washington and Lee’s trouble may be linked to some drastic changes they have made of late. A sharp 40% reduction in class size (the biggest reduction thus far at any school) may have hurt their ability to spend. Also, W&L has had poor job placement relative to its peers of late, possibly the result of its move to an experience-based learning model for third year students. Read here for a report on the poor results of that program.

Yale is at 1 as always. Stanford jumped down to number 3, but it seems to alternate spots with Harvard (or tie) every other year. No big deal. Chicago is holding strong at the 4 spot which I like to see (That’s my school, baby!) Columbia and Chicago have shared the 4 and 5 spots for about the last four years or so, so the top 5 is pretty stable lately.

Lower down, the big surprise is Duke creeping into the top 10, even if they got there by a tie. Good for Duke. Still, my guess is they’ll be back down soon enough. Michigan continues its slide relative to its peer schools. The lower end of the top 10 is going to be their home for a while I would guess, but they’ll still always be a T10ish school.

All and all, it’s business as usual in the T14. Stuff moves around, but these schools so dominate the reputation component of the rankings that it’s tough to displace them. I could picture UT-Austin becoming part of this group so that we can finally start talking about a T15, but these schools will always be the elite group.

Nothing too much worth commenting on here aside from the aforementioned Washington and Lee. A lot of public schools have taken slight jumps, showing that they are weathering the applications drop well. I continue to pump in-state tuition as your best option if you aren’t going to an elite school, so think about backing the winners and go that route if you are headed to law school.

Public schools situated in stronger markets are going to do the best right now while the legal economy remains tepid. You can see some evidence of that throughout the top 50 (William and Mary, U of Washington, U of Georgia, U of Illinois)

There are also some outstanding performers in the private school category: BYU has been doing a fantastic job being by cheaper than everyone and providing better employment stats than many comparably ranked schools; that’s reflected in their eight-point jump. Southern Methodist is also doing well, likely on the strength of the good job prospects in its target market of Texas.

Don’t put too much stock in little jumps and dips in the rankings. I’ve been watching these since I started law school, and schools usually stay in the same general area. Bear in mind that the lower down you go, the more arbitrary the rankings get. Past 50, it’s not uncommon to see huge leaps and big drops. It’s not always very closely tied to reality.

RELATED: HOW TO TAKE ADVANTAGE OF THE GREAT APPLICATIONS DROP

The rankings should always only be a starting point for your research. If a school has been headed down in the rankings, that’s something to look into, but it’s usually just a minor shakeup. As we always say, the most important thing to look at when you are deciding between schools is how much the school costs and the kind of job prospects they can offer you.

I’m going to add some extra info about specific parts of the rankings, which can better help you understand why schools are where they are on the list. Here is a table of the top 25 school’s median LSAT scores from the class entering in fall 2013. These median LSAT scores accounted for 12.5% of this year’s rankings.

As you can see, LSAT medians line up pretty well, but not perfectly, with this year’s rankings. Median LSAT helps assess roughly how desirable each school is, as all things being equal stronger LSAT scorers tend to get their pick of schools.

Observers may notice that median LSATs have fallen quite a bit from back in 2008/2009/2010 when overall law school attendance was strong. Basically, like we’ve been saying, law schools are easier than ever to get into. Even the highest ranked schools are having trouble maintaining their numbers given the dearth of applicants. I will try to dig up a chart from back then to compare, but The Legal Whiteboard provides some ready statistics about this year’s changes, which are pretty substantial:

So there you have it. Median LSAT scores are down all over the board. Where you see big swings in the rankings this year, median LSAT is likely playing a role (such as at American University, which relaxed admissions standards to a frightening extent). A large number of lower-ranked schools, in particular, have had significant difficulty attracting the kind of students they used to have.

We’ll keep updating with more in-depth looks at different parts of the rankings, so bookmark the page and follow us on twitter @onlawschool.