You are at:Home»Archive»How To Take Advantage Of The Great Law School Applications Drop
457
SHARES
FacebookTwitter

Law school applications are down. Way down. Back in 2010, everyone was lined up to get in. Now, the lines are half empty. Does this mean you should take your business elsewhere too? Maybe. But, if you are determined to go still, here’s how to take advantage of the applications drop.

Law schools are frankly desperate to get you to come. I realize desperation in potential partners is unattractive. Humans interpret desperation as a signal that you can probably do better. However, we aren’t quite talking about selecting a mate for life here. You are looking for a law school that is going to find you job, one that you don’t have to pay too much to attend. Settling for the desperate suitors might be your best option.

Here, we try to help you figure out which desperate law schools might be a good bet, and which ones you should probably shun.

First, let’s take brief look at the history of the recent applications drop. This will give you a better idea how you can work this situation to your advantage.

Take a look at applications volume over the last few years: 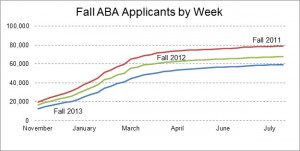 The far right end of each line represents the total volume of applications for law school when all the numbers were in. 78,800 would-be law students applied to start in Fall 2011. Two years later, only 59,426 applicants showed up, capping off a nearly 25% decline in two years. That’s not even the full extent of the carnage: overall, applications to law school are down over 40% from 2004 highs.

You can probably lay most of the blame for this drop squarely on law schools. They are charging the same base price for tuition that they were before the legal economy took a big hit. Not surprisingly, fewer people are applying.

Click on the little circles to see different years. As you click through, you can see the yellow enrollment bar doesn’t drop much. In 2009 they got 51,600 applicants to enroll at law school. In 2012, the most recent year for which we have enrollment figures, it’s still pretty high, at 44,500.

You might ask, how on earth are they doing this? Shouldn’t they be losing a ton of students?

The top 100 schools at least have done pretty well getting enough students to fill seats. A lot of schools, too many probably, are getting it done by slashing admissions standards, sometimes drastically. For now, just bracket that off in your head as the bad kind of desperate. Every school has had to lower admissions standards a bit. That’s just the reality of drawing from smaller applicant pool. However, you should be wary of schools that have really let themselves go. If a school’s LSAT medians have dropped substantially from 2009-2010 (like 5 or more points), this can indicate that the school is heading for trouble. At the very least they are risking a big slide in the rankings. That’s not merely theoretical either: some schools are already taking this slide, big time.

Severely dropping LSAT/GPA medians likely mean the school is trying to stay large in order to maintain big profits. I don’t know about you, but I would have zero time for a school that is trying to live like it’s still 2004. These are lean times. They should do what responsible schools are doing: cutting down on the amount of students they take. Trimming class size allows a school to keep student quality up and maintain the program’s value.

Staying big and slashing admissions standards is the bad kind of desperate. So what is the good kind of desperate? Plying you with cash. Schools that can afford it are spending a ton right now scholarships to attract high quality students. For the 2008-09 school year, schools spent $816 million on scholarships. That budget swelled to over $1 billion for the 2011-12 year and is likely higher now. (source: WSJ) So, while most schools are not actually lowering their price tag, they are offering deep discounts to students on a case by case basis.

Everyone agrees that overall law school is too expensive right now. It doesn’t, however, have to be too expensive for you. The best way to take advantage of the applications drought is to put yourself in position to get a big scholarship.

So how do you do that? While there is more scholarship money on the table now than ever, there’s a big caveat: by and large, the money is going to applicants with high numbers. Schools want students who raise or at least help them maintain their median LSAT and GPA. Your GPA is often a settled matter. If it’s good, then great. However, all is not lost. Like it or not, LSAT matters a lot more than GPA. Start preparing for the LSAT, get your score up to or above a school’s median and you are in a terrific spot to draw big money.

Researching the exact numbers it might take you to get a good offer is easy: Take a look at class profile for the most recent years and you can see where you stand compared the recently admitted class. Look at Duke Law’s most recent class profile as an example. You want one or both numbers very close to or above these current medians, so for Duke, you want at least a 169 or better. Pair that with a GPA over 3.75 and you are in even better shape. They’ll be shooting to improve or at least maintain those median numbers when they assemble next year’s class. Help them do it and you stand a better chance to get a scholarship.

The big issue is that, right now, not every school is willing or able to cough up extra cash. It might take a little creative googling on your part, but generally you can find out via the news whether a school has beefed up on scholarships. Generally, schools with bigger endowments have been outperforming the rest. The T14 schools especially have been spending like crazy, and these schools are potentially a better value for you compared with several years ago. Yes, this spending has kept the numbers up at these schools and, as a result, they are still very hard to get into. However, they are going to make it extra worth your while if you can make yourself a competitive applicant.

Outside the T14, spending on scholarships is going to vary greatly by school: some places might be a gold mine, while others are depleted. You can do your research, but one sure way to find out who’s being generous is to apply to a broad range of schools and see what offers they come up with. That’s always been a good idea, but it’s paramount now that schools differ so widely in their ability to offer you big money.

Basically, watch out for ‘bad desperate.’ You CAN do better. Instead, study hard for the LSAT, get that great LSAT score and wait for the schools with cash to flock you. Don’t feel bad for taking advantage of desperate law schools. They want you. You want money. They have money. Go take it.