In the six months or so that we’ve been around, lawschooli.com has become the internet’s most trusted sources for LSAT prep advice. Our thanks go to you, our readers, for all the great feedback. We love hearing when we’ve been helpful, so thanks a lot!

To kick off the New Year, we wanted to show you the best new, current, and up-to-date LSAT products that we’ve seen this year.

This is the stuff that can be considered truly innovative and cutting-edge, and that will help you out the most in 2014. Congratulations to the makers of these products for putting together such great material. There a lot of junk out there that is all sales and advertising, but no substance. Instead of giving you more junk, the people who made this stuff are helping LSAT prep students get real high-quality, valuable resources, and we applaud that.

Think of this as the lawschooli.com awards for excellence in LSAT prep!

The Blueprint™ For LSAT Logic Games

This is a logic games only offering, but it’s second to none. This brand new book came out this year and we’ve been raving about it ever since. I’m going to say this wins the “Best LSAT Logic Games Book of 2014” award because it’s so accessible and comprehensive. Don’t make the mistake of learning logic games without either this or the next book on the list. Both are top notch, but The Blueprint for Logic Games is arguably an easier, more fun read.

Blueprint has been around for a long time and I think some of the older companies tend to stagnate a bit, but Blueprint has certainly bucked this trend with this offering. If you want to see our full review, check it out here.

We won’t waste a lot of breath pumping this one up. If you’ve been with us at all in the last six months, you know that this is our all around favorite resource for learning logic games. The previous edition was starting to look a little dated, but they brought it fully up to speed in 2013 and it roundly deserves it’s spot on this list. Read our full review here.

A lot of people search around and see that this book and the previous one tend to be the most recommended by high scoring LSATers for studying logic games techniques. So how do you choose? Well, as we pointed out above, you don’t have to. However, taking a look at their techniques for approaching games might help you pick the approach that looks most natural to you. Read our post on Basic Linear Games Techniques to get an idea of how they each handle linear (ordering) games. That can be a good way to decide since it’s pretty fundamental.

The title ‘Disrespecting The LSAT’  kind of tips you off that this isn’t a regular LSAT book, and it’s not. This is a completely different approach to LSAT logical reasoning problems wherein the author, Nathan Fox, teaches you how to destroy LSAT problems by example. The book takes you through tons and tons (and tons) of real LSAT LR questions with him so you learn by osmosis. After a read through, you should much better able to copy the approach of a high-scoring LSAT expert.

I highly recommend this for anyone who is struggling and thinks that “they just aren’t an LR type thinker.” I hear that from readers a lot who seem ready to give up on mastering this section, and please, before you throw in the towel, try ‘Disrespecting The LSAT’. Fox’s book will effectively show you that these problems simply aren’t as hard as you are making them out to be. It’s a huge confidence booster and an innovative approach.

For this one, we have to give the award to our own stuff. That’s because we went out and made the effort to craft the first truly great schedule for LSAT self-studiers. This is built on what we did to score in the 170s, using the best LSAT prep resources available: The Powerscore Bibles. It’s the only schedule that tells you exactly when to do what, including:

Click Here To Get The Premium Daily LSAT Schedules 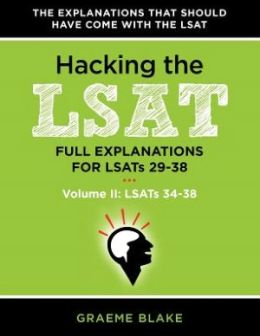 It used to be that all the good LSAT explanations out there were sold as a package with the LSAT prep test. This was a tough deal if you had already bought the prep tests in question, because you have to pay for the test again to get explanations (any time you buy something that has real LSAT questions, you have to pay big licensing fees to LSAC, the makers of the test).

With his Hacking The LSAT explanations, Graeme Blake, a professional LSAT tutor (and 177 scorer, just like Josh!) has done a tremendous amount of work to publish high quality LSAT explanations that come separate from the test. They do what all good LSAT explanations should, which is to bring you right inside the head of a high scorer and show you how to copy their successful strategies. What’s better, Graeme has done one for almost every single LSAT prep test.

Great work from Graeme on these. They should be a huge help to LSAT self-studiers in 2014.

Just a head’s up: we get no money from any LSAT company to make these recommendations. We are completely independent and these opinions are based on just our expertise as LSAT prep gurus and former LSAT teachers.

We do receive a commission if you click on these amazon links and end up buying the products. By buying through us, you support the work we are doing, which is to try to provide high quality, unbiased advice to potential law students. We thank you deeply for your support and readership. 2013 was a great year for us and we look forward to providing more LSAT advice in the coming year.

As always, we are here to answer you questions. If you want to know about any prep resource that you are considering, let us know in the comments and we’ll tell you whats up. We keep abreast of just about everything going on in the LSAT prep world so we’ll likely know. Happy 2014!

0L LSAT Prep Books LSAT Prep Materials
Previous ArticleDo You Have To Be Smart To Do Well On The LSAT?
Next Article A Private Law School Significantly Lowers Tuition!